Welcome remarks from TSUDA Atsushi, Executive Director and Vice President & Director General of the Division for External Relations, The University of Tokyo were followed by lectures from SUGIYAMA Masakazu, Director, Research Center for Advanced Science and Technology and SATO Jin, Vice Director, Institute of Advanced Studies on Asia of the University of Tokyo. Professor SUGIYAMA introduced the status of Green Transformation (GX) initiatives and action plans in the University of Tokyo. Professor SATO spoke about the role that social science can play in global environmental issues, including his own research experience.

After the lectures, Professor KUMADA Akiko from the university’s School of Engineering, spoke from online and then the four held a discussion session where various topics were discussed, starting from how to realize a carbon-neutral society and what are the problems to realize it. At the end, each speaker gave a message on the realization of a carbon-neutral society.

Many people participated in the session both at the venue and online and questions were actively exchanged. The event ended on a high note with closing remarks by MASUYAMA Masaharu, President, UTokyoNY. 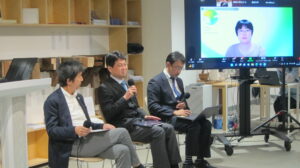